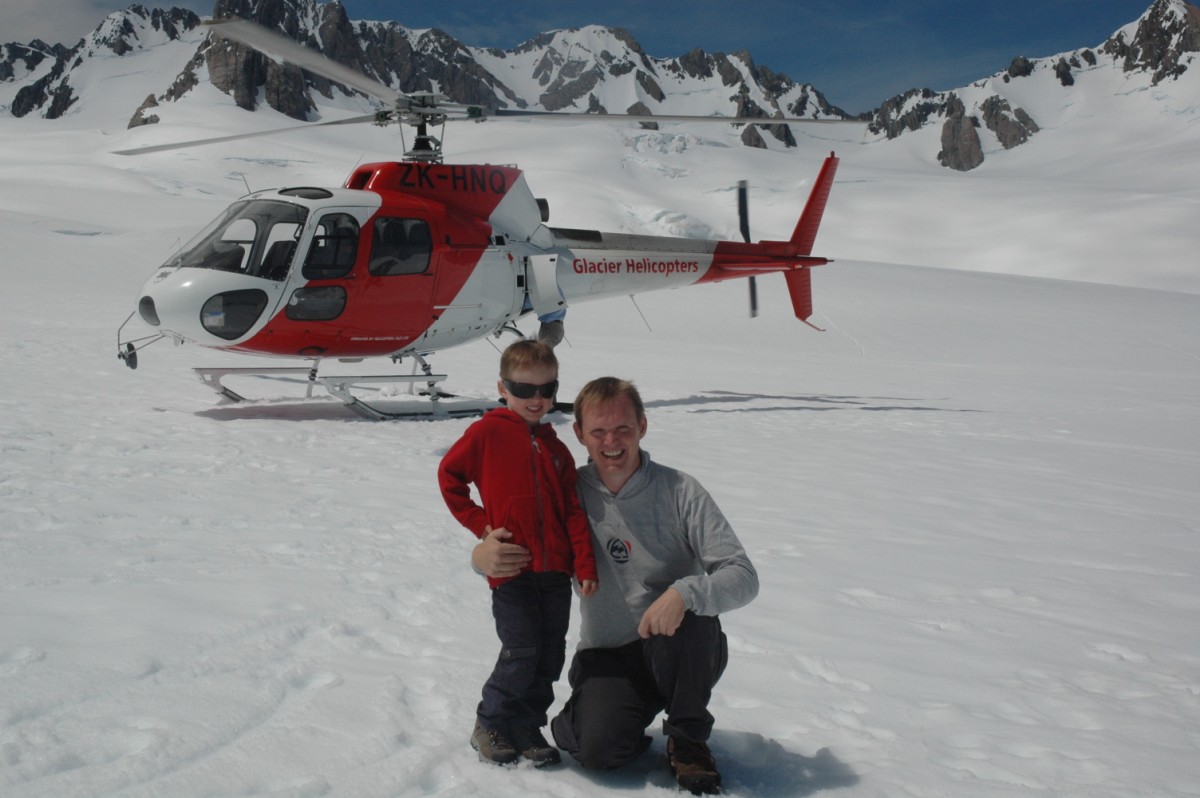 One thing I've never done in my life is fly in a helicoptor. I've been secretly wanting to fly over the Franz Josef for a while (sorry to all my green friends - I know this is probably not very environmentally friendly, but I am on a driving holiday here - so I'll use up all my credits here and be good next year).

I also wanted to take Jaron on a helicoptor flight - his behaviour has not been great last couple of days, but when I asked him what his favourite part of the holiday was so far and he replied "Getting toys and playing on my ipod" I figured maybe it was time to really give him something to remember.

Anyway - we booked a 20 min flight (with snow landing) with Glacier Helicopters. It was quite expensive but the best 20 mins I have every spent in my life I think... well worth every penny and I highly recommend it. Our pilot Giles was particularly good (and we thought looked very cool in his special snow glare visored helmet) - I was also impressed he managed to print off the souvenir picture from a printer in the back of his helicopter to sell to us while we were still up there in the snow.... clever!

Jaron was absolutely brilliant and we had a lot of fun on the snow at the top - he's never seen snow before - I did forget his sunnies though so he had to were my rather over-sized ones (it was very bright for his little eyes). I haven't been skiing in a few years and it made me want to book my skiing trip for next year right away when I get home.

After the flight - we visited the Kiwi Centre and got to see our first kiwi - several actually. They've just hatched a load of Rowi Kiwis which are the rarest in NZ - I think only 200 in the wild but they are releasing about 60-70 each year. Main threat to Kiwis is yet another European introduction - The Stoat.

We learned that this area has quite a few feral-pest animals here that are endangered elsewhere in the world - some Himalayan shaggy goat thing (Tahr) and the Chamois that was introducted by Franz Josef himself. In addition there's the Aussie possum which I'll get onto.

Ended the day at Fox Glacier - straight into the campground, we are going to do a hike to the glacier tomorrow.