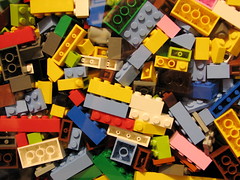 Yesterday I had the pleasure of speaking at the E.X.I.T.E camp for girls at Bond University. Exite is a programme organised by IBM and has the aim of encouraging girls to pursue careers in engineering and technology. Our local event is organised by Carol Woodhouse at the Gold Coast IBM Lab.

I was going to do a programming exercise, but in the end I chose something more hands on a did "The Lean Lego Game" which is a practical game for learning about Agile/Lean developed by Danilo Sato & Francisco Trindade at Thoughtworks.

I was a little apprehensive about running for the game for an audience so junior with no Agile experience - but the activity brought many surprises for me.

After a short intro where I explained a bit about Agile and how it helps us to deliver software (whilst also having a lot of fun), the girls got straight into the first "push" exercise. Very quickly all the usual things happened ie, panic, inventory build up, over production. The line kept producing red houses and I refused to buy them as I said it was an angry colour and very out of fashion in the lego house market!

I was fairly hands-off when asked questions - referring them to the written process, this allowed me to demonstrate some key points about the production line during the retrospective (ie. the need for process, orchestration, managers, timekeepers etc in the traditional production line).

On the first retrospective I half expected stunned silence but the feedback from the girls was excellent and they picked up pretty much all the points I had expected them to.

The 2nd exercise "Pull" was very interesting. As expected there was a lot less chaos, particularly in the later teams, but team 1 completely lost the point about slack and sorted all the lego pieces into 4 big piles (they were getting good at it by now). This then started to ripple through to team 2 so half way through I reminded them about inventory and that maybe slack was ok, so they eased off and I think a few of them even went outside and mucked about for a while. The group size was quite large (6 or 7 in each team - too big probably) so this probably had something to do with this tendency.

Team 4 showed some interesting behavior, for similar reasons to above some of them were slack one of the team members started making a white house "on the side" as this was the colour I had asked for and she was hedging her bets. It was almost finished when she saw that I had seen it and hid it under her jumper. I didn't say anything - just cruelly never called white again! That led to a discussion point about kanban and how to utilize slack in the retrospective. At the end of the exercise the Pull system produced 1 more house that Push with a lot less effort and panic so the point was demonstrated.

Again in the retro all the main points about the exercise were picked up by the girls, we talked about unevenness and slack and I suggested some ways that a real team might utilize their slack time or ways to level the system.

The third "work cell" exercise was a little different and I was quite nervous about how it would go. As it was just before lunch, I didn't give them a lot of instructions - I just told them to go for it and build some houses - any colour they liked.

I didn't mix the teams so as expected team 4 did very well - they started off individually, but eventually formed their own little self organised mini-line within their team. In one iteration they produced 11 house - more than the whole room produced in any of the previous exercises.

Team 3 complained a bit about the instructions and didn't know how to build the house, but eventually they got into it and ramped up quickly to be reasonably productive. I think the fact they had seen "the set" did help a bit.

Team 1 messed about a fair bit, but did produce some houses in the end - I think they were pretty bored by the previous exercises so were ready for lunch. They also did a bit of what team 2 did.

Team 2 got straight into things - but decided they weren't going to build houses. They seemed to love the Lego (I noticed a couple of people in their group continued to build stuff right through the retros) and built all sorts of things, including stairs, towers, puppies! and one of them spelt out her name in Lego
.

I didn't think there would be much new in this retro, but again it was an interesting one. We talked about team 4's stellar job and their experience paid off - they also managed to do Kaisan without me really telling them about it - a good self organising team emerged. We discussed how team 3 quickly ramped up once they got over the initial hump, the members of team 1 that built houses also experienced this. Team 2 led us to talk about creativity, fun, 20% time and I used the examples of Google and 3M here.

My conclusion was a little weak I tried to bring it back to software and wrap up but unfortuately it was lunch time and the experience of the work cell exercise had got them all into lego in a big way and they just wanted to build and not listen. I think if it wasn't for the organisers dragging them away they would have been quite happy to stay there all day and play Lego!

I like the Lego game a lot and hope to do it a bit more with different types of people. It will be interesting to see how people with more industry experience go with it - maybe this will help, or maybe will even be a hinderence. From my experience at Exite - the girls seemed to easily grasp the core concepts of Agile and Lean and this encourages me to think that "different" does not equate to "difficult" it's just a bit of a paradigm shift for some that have been doing things the other way for too long.

Thanks to Danilo and Francisco for the game - great job, and well done to IBM and Bond University for a very well run event.